Discuss about the International Finance USD.

Evaluating the distribution method for USD/AUD and graphically computing its return: 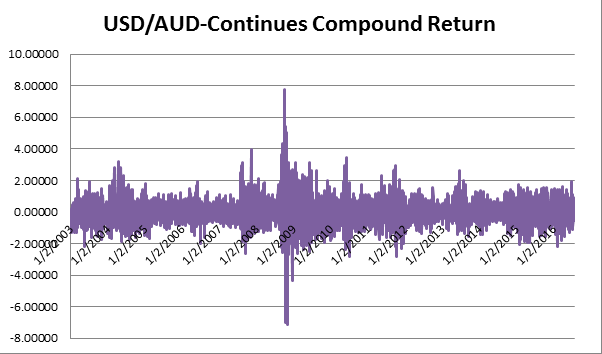 Figure 1: Depicting the continues return of USD/AUD generated from 2003 till date

The above figure 1 mainly depicts the overall continuous return, which has been provided by USD/AUD from 2003 to date. In addition, after analysing the overall figure it could be evaluated that USD/AUD has a non-symmetric approach distribution approach. Reboredo (2013) mentioned that stock return are mainly non-symmetric or the basic rule of demand and supply could lose its friction in determining prices of a stock. Thus, it could be concluded that return provided by USD/AUD do not follow normal distribution systems. On the other hand, Ghosh et al. (2013) some inexperienced investors still use statistical distribution method for identifying opportunities in the stock market, which mainly increases their overall risk from investment.

Analysing graphically the difference between actual and artificially created returns:

Figure 2: Depicting the different between continues and artificial returns

The overall figure 3, mainly depicts the difference between continuous and actual return provided by USD/AUD from 2013 till current data. In addition, the continuous compound return mainly helps in providing adequate calculation of return that is generated from particular security Bollerslev et al. (2014). Furthermore, the continuous return method mainly uses the LN function, which is mainly used in high beta securities to evaluate the risk and overall return generated from volatility. However, normal return just provide values on the basis of probability. Small investors to evaluate the percentage of change in prices of certain stocks use cumulative return calculation method. On the other hand, McLean and Pontiff (2016) criticises that investors uses the return calculation based on its own perception, which increases risk exposure in their portfolio. 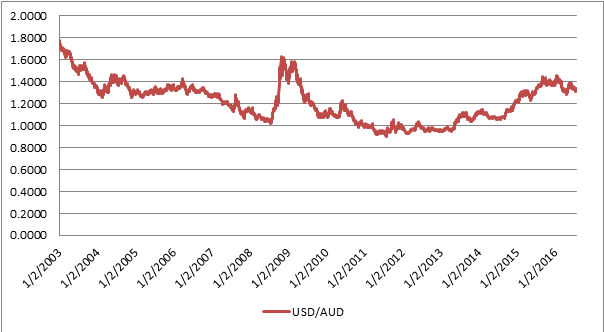 Figure 3 mainly depicts the overall price movement of USD/AUD from 2003 until current date. This figure mainly helps in evaluating the overall strategies, which could be used in making adequate investment for next 30 days. Reboredo (2013) mentioned that investors mainly use historical prices to evaluate the overall trend of the security and make adequate investment decisions. In addition, mean is -0.008499593 and SD is 0.84263895, which mainly helps in depicting that USD/AUD is currently in a downtrend. 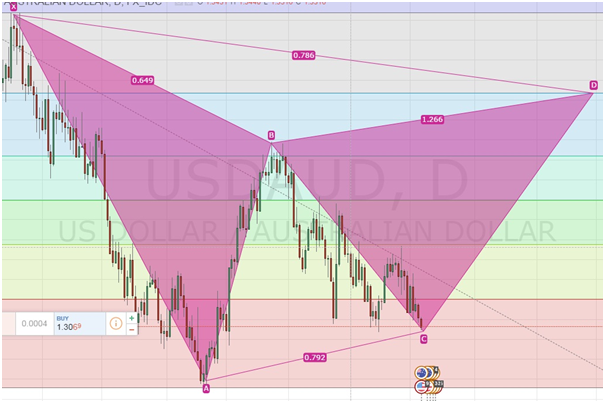 In addition, figure 4 mainly helps in depicting a harmonic trading strategy, which could be used by the investors to make adequate investment decisions. Furthermore, the Gartley pattern is being formed currently, which might help investor to make adequate return from their investment. In addition, the investor could initiate buy orders at level 1.3061 while keeping the stop loss at 1.2759. Moreover, the investor could also initiate a sell order from 1.4239 with a stop loss of 1.4646. Hughes and Ferrier (2014) mentioned that harmonic trading strategies mainly help investor to detect the overall trend of a security and make adequate investment bets. Thus, combing intuition, statistical valuation, and harmonic strategy the overall USD/AUD is in a downtrend.

Table 2: Depicting the hypothesis calculation for analysing trend of USD/AUD

Table 2, mainly helps in depicting the hypothesises calculation, which are used to make adequate investment decisions. Moreover, the overall hypothesis calculation mainly helps in depicting the initiation of Sell Side trades, which could be conducted by investors. In addition, the overall hypothesis valuation is only conducted on past 30 days to determine the opportunity in short trend, which could be used by the investors. Moreover, the standard error is 0.011841204 mainly depicts the overall continuation of downtrend in USD/AUD. Bollerslev et al. (2014) mentioned that hypothesis mainly helps investors to make adequate assumption, which might reduce risk from investments.

Depicting efficiency of FX market with the help of Autoregressive of order 1 model and Random Walk Model:

The continuous return provided from FX market could be effectively evaluated from different types of different types of hypothesis and return calculation. Moreover, after evaluating the continuous return generated from 2003 to 2016, it could be conducted that there are no significant return provided to the investors. FX market does not have huge fluctuations, which might affect directly on the return provide from different currencies. In addition, with the help of ‘Autoregressive of order 1 model’ and ‘Random Walk Model’ the investors effectively derive the future price movement of USD/AUD. In addition, Autoregressive of order 1 model mainly adds intercept and variable value, which can be effectively multiplied with the present day’s closing price. Zhang et al. (2013) mentioned that forecasting method mainly helps in depicting future trends, which might help in reducing the overall risk of investment.

Evaluating the best model, which could be used for future forecasting:

Table 3: Depicting the forecasting method of Autoregressive of order 1 model

Table 3 and 4 mainly helps in depicting ‘Autoregressive of order 1 model’ and ‘Random Walk Model’, which could be used in forecasting future trends of USD/AUD. In addition, the Random walk model is appropriate and has positive values of MSE, RMSE, and MAE. However, Autoregressive of order 1 model has a negative MAE, which might hamper the overall forecasting of USD/AUD. In addition, while calculating difference between forecasting and actual prices, RWM has mainly depicted the closest prediction, which could be used in generating higher return from investment. Yontay et al. (2013) argued that due to continuous volatility, the predicted prices only depict the overall trend, which in turn increases risk of the investors.

Depicting risk assessment and implications for investing on daily basis:

In addition, with the help of parametric method the overall risk from investment is calculated at $38326.4570. This mainly indicates that by using parametric method, investment of 1 million USD will have around 3.83% of risk. Thus, volatility of the financial market could mainly increase the overall risk implications for the next 90 days. Moralles et al. (2013) during an economic crisis, predictive prices could lose its friction and increase risk of the overall portfolio. 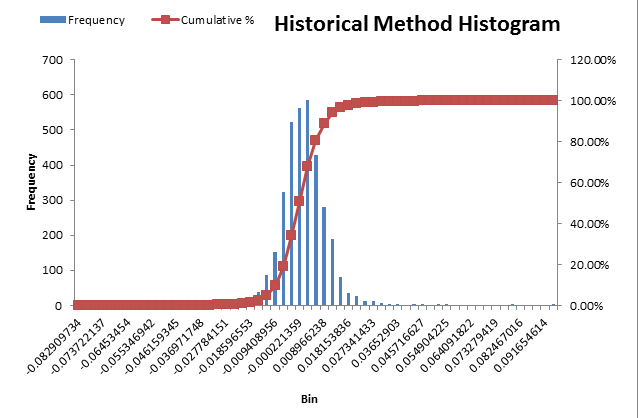 Furthermore, with the help of figure 5, the historical simulated method could be effectively analysed. Furthermore, the overall risk ranges from 0.08909734 to 0.091654614, which effectively depicts the maximum and minimum return that could be generated from 1 million USD investments (Lu et al. 2013). In addition, the maximum risk is only within -0.009408956 to 0.018153836, which could affect the overall investment risk of 1 Million USD.

Lu, Y., Ren, P. and Gu, Z., 2013. The Statistical Difference of Chinese Stock Market Risk before and after the Stock Index Futures Based on VAR Method. International Journal of Business and Management, 8(14), p.182.

Moralles, H.F., do Nascimento Rebelatto, D.A. and Sartoris, A., 2013. Parametric VaR with goodness-of-fit tests based on EDF statistics for extreme returns. Mathematical and Computer Modelling, 58(9), pp.1648-1658.

GET HELP FROM OUR EXPERTS

Thank you for contact with us. You will receive a email shortly in your email address.