Outline making scheme and assessment criteria for write-ups
Clear presentation
An appropriate and coherent structure
Good use of headings, language, grammar and sentence structure
Use of paragraphs for ease of reading and comprehension.
Introduction clearly identifying the nature of the issue/ problem, the context within which the specific issue is being examined and outlining the structure of the write-up
Body of the report should critically analyse and evaluate (not simply describe) the issue/problem area with a range of view examined including if appropriate identification of strength and weaknesses.
â€¢ Key points clearly stated and linked to the academic literature, empirical research studies, case studies or illustrative examples from company annual reports, theories/issues illustrated with practical examples.
Corporate Governance, Corporate failure, business ethics, and audit

For better presentation to the topic as reporting to stakeholders, the paper has selected some companies which are as: Origin energy limited, wesfarmers limited, Woolworths limited.

In case of Procter and Gamble, the company was founded in 1837, headquartered in United States. The company has a wide range of stakeholders; the number of the employees with the company 105000.

The paper has also considered Anglo American PLC, which was founded in 1917 and headquartered in United Kingdom. The company has above 135000 employees.

A stakeholder can be an individual or company or a group of individuals and companies. Stakeholders are the one which got influenced by the operations of the company. The examples of stakeholders in case of a company are as: creditors, employees, shareholders, unions, suppliers, accountants and accountants. These are the persons which get something in return from the company in the form of goods and services, dividend, interest, payment in return (Nanfack, 2014). 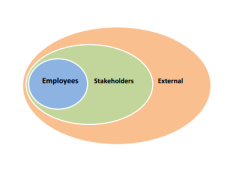 For this the company requires to do stakeholder analysis. It is a technique in which key people of the company are found.

For better analysis the paper has done an analysis over the company’s shareholders which hold majority of the shares. Like in case of Origin energy limited, the company has major shareholders as HSBC custody Nominees (Australia) limited, JP Morgan nominees Australia limited and National Nominees limited (Caroll, Brown, & Buchholtz, 2017).

In case of a diversified company such as wesfarmers and Woolworths limited, the management of the company has to report to its stakeholders about the environmental aspects of the business, their relationships with supplier, food safety and ethical resourcing (Wesfarmers, 2017).

Reasons for reporting to stakeholders

Following are some of the importance of reporting to stakeholders for the company:

The above stated benefits can only be achieved if the company does effective reporting to stakeholders. For this, many companies appoints a team secretary whose task is to look after the preparation of report making and compliance to rules and regulations in preparation of the report.

The main objective behind reporting to stakeholders is to conduct an effective communication. This can be understood as the communication cannot be made separately to each stakeholder, hence a common report has to be prepared in which all the required information are mentioned. This helps the stakeholders in getting informed about all the achievements, strength, weakness, opportunity and threats of the company. This is the reason that to communicate with the mass audience, the company prefers reporting to stakeholders (Jepsen & Eskerod, 2013).

How reporting to stakeholders is done

The reporting must contain accurate, complete, factual and updated information for the company operations and its dealings. The reporting provides details to stakeholders regarding the status, routine as followed by the company, and the improvements as in the company dealings. Hence the reporting should be made in such a way that it accomplishes the above requirements.

There are no specific standards as to be followed by the company for reporting for the stakeholders. However there are some guidelines which companies are required to follow. These requirements are as: the team secretary and team leader must check that the reporting includes all the relevant details regarding the company such as its status and strategies which the management of the company has planned to be followed by the company.  This can be done by incorporating performances of the company on regular intervals in the report. This would lead to solve the issues that can create a burden on the company (OECD, 2010).

The reporting to stakeholders of the company is to be made by considering that it should be convenient to decode the message which the report wants to convey. For this, the management should select the choice of media very cautiously. The information which the company wants to be conveyed to its stakeholders the reason behind this is the media selection is the base of the information to be transmitted. Hence if the company fails to choose a suitable mode of tool to communicate the message it can lead to non effective communication.

The reporting to stakeholders can be made by the mentioning the required information in the company annual reports, its corporate social responsibility report, general media, email, company official website, and sustainability report. These are considered as a valid source for providing information for the shareholders. The reason behind this is these reports are verified by the internal as well as external team of the company such as team secretary, team leader, internal auditor and external auditor.

It has been observed by analyzing the stakeholders review over their respective companies, that the management of the company is unable to present information over the working of the company such as any new innovation made by the company (Leipziger, 2010).

It has been observed that the stakeholders find difficulty in analyzing the information as presented in the reporting issued by the company. The reason behind this is use of less facts, and complex language.

Such as in case of Origin energy limited, the company has its major stakeholders as HSBC bank. Therefore while reporting to stakeholders; the company would be requiring to report all about its financial structure and operations which lead to affect the principle of confidentiality.

You will receive a email shortly in your email address.